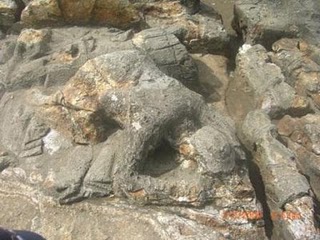 Malin Kundang is a tale that originated from city of Padang, West Sumatera. Malin Kundang legend tells about a child who is rebellious to his mother and is therefore condemned to stone. A form of rock on the Aie Manih beach, Padang, said to be the remains of the ship Malin Kundang.

At one time, there is a family of fishermen in the coastal region of Padang. Because the financial condition of the family concern, the father decided to make a living in the country by wading across a vast ocean. Malin’s father never returned to his hometown so that her mother had to replace the position of Malin’s father to make a living.

When Malin Kundang becomes a work seeker teenage, he told his mother that he wanted to leave the village to look for a better life. Although it was hard for the mother to let he goes but she gave permission.

It was happened that Malin Kundang was very succesful and became rich after quite sometimes. He was also married to a very beautiful woman. After along
Knowing this, Malin’s mother went to the ship dock in hurry and cannot wait to see her lovely son. Out of the ship Malin found that his mother was only an ugly and poor woman. So he was ashamed and embarrassed, He didn’t want to admit that she was his mother. he turned back to his ship and ignored his mother than sailed away although his mother was crying and screaming his name. His mother feeling was very hurt and she prayed the God to show His power.

Then a big hurricane and wave struck Malin’s ship. By the time He regretted it was already too late. His ship sunk and stranded on Aie Manih Beach. The cursed of his mother had turned Malin Kundang to stone. Until now Batu Malin Kundang or Malin Kundang Stone can still be seen at a beach called aie manih beach, in the southern city of Padang, West Sumatera.

Map of My Posts